If pregame reports are an indication, Florida State players will try to get under University of Michigan coach Jim Harbaugh’s skin when the two teams meet in the Orange Bowl 2016 Friday night. Kickoff time is 8 p.m. Eastern at the Hard Rock Stadium in Miami Gardens, Florida.The Michigan Wolverines bring a 10-2 record into the game after having suffered losses to Iowa (14-13) and Ohio State (30-27). The Florida State Seminoles are 9-3, having lost to the Louisville Cardinals (63-20), the North Carolina Tar Heels (37-35) and Clemson Tigers (37-24).Michigan has one of the best defenses in the country, and when their opponents have to drive the ball down the field, they’re often stopped short of the goal line. Trying to throw against Michigan is risky, too, because the Wolverines allowed only 135 yards per game in the air, and had more interceptions (12) than touchdowns allowed (9) in the passing game. 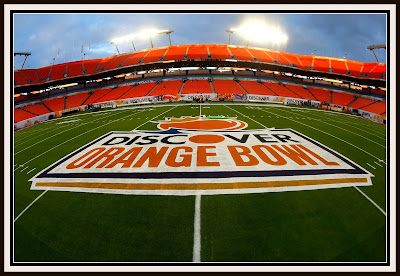 A head game against Harbaugh may be the Seminoles’ best chance, The Detroit News reported.“He’s a good coach,” FSU defensive back Marquez White said Tuesday morning during a pre-game news conference. “He’s him. Everybody has their own personality. He feels like he’s the guy. I like to watch him on TV and see how upset he gets.“Hopefully we can piss him off, that’s our plan going into the game. We want to piss off Harbaugh. We want to piss him off.”Harbaugh proved worthy of his reputation in the season finale double-overtime loss to the Ohio State University Buckeyes that cost the Wolverines a shot in the four-team College Football Playoff. Harbaugh did go a little berserk, spiking his headset to the ground in a move that earned an unsportsmanlike penalty. The Big Ten reprimanded Harbaugh for violating the conference’s sportsmanship policy and fined the University of Michigan $10,000.

Of course, the Seminoles need to do more than rattle Harbaugh. They’ll need to find a way to run the ball against the Michigan and get the ball in running back Dalvin Cook’s hands. He rushed for 1,620 yards this season, scored 18 touchdowns and ranks sixth in the country in rushing yards and touchdowns.The Seminoles will also need to force turnovers, CBS Sports reported. Winning the turnover game gave Michigan nine of its 10 wins in regular season play, but the team’s losses came in two of the three games in which the Wolverines had more turnovers than their opponents.Quarterback Wilton Speight’s health also may figure into the outcome of the game. A shoulder injury in the game against Iowa weakened his arm, and there’s danger of interceptions if he isn’t at full strength.