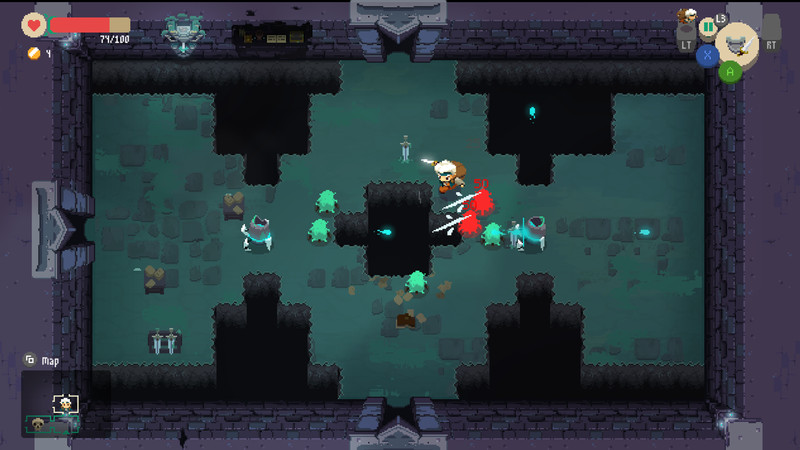 During a long-passed archaeological excavation, a set of Gates were discovered. People quickly realized that these ancient passages lead to different realms and dimensions – providing brave and reckless adventurers with treasures beyond measure. Rynoka, a small commercial village, was founded near the excavation site providing refuge and a place for adventurers to sell their hard-earned riches.

Moonlighter is an Action RPG with rogue-lite elements following the everyday routines of Will, an adventurous shopkeeper that dreams of becoming a hero.

While conducting your business in Rynoka village, you can put items on sale, set their price carefully, manage gold reserves, recruit assistants and upgrade the shop. Be careful though – some shady individuals may want to steal your precious wares!

Defeat various enemies and bosses, and revel in challenging and deep combat mechanics. Masterful control of your weapons, critical timing, careful positioning, and an understanding of your enemies and environment are crucial to your survival. How you battle your enemies is up to you.

Get to know your neighbors as you restore the prosperity of this small commercial hamlet. Help establish new businesses and watch them grow in the idyllic community of Rynoka.

Understanding the crafting and enchanting system is essential for your progression. Interact with the villagers to craft new armor and weapons, and enchant existing equipment. This creates a great deal of flexibility and spices up the way equipment is used.

Access strange worlds through otherworldly gates and collect valuable items from exotic civilizations: resources, weapons, armors and peculiar artifacts. Hoarding everything won't be possible - use the unique inventory system wisely to take the most profitable loot with you.

Gates lead to different worlds. Each run is unique and forces you to make smart and calculated decisions. You never know what you will encounter next – that’s why you must be prepared for everything. 6d5b4406ea 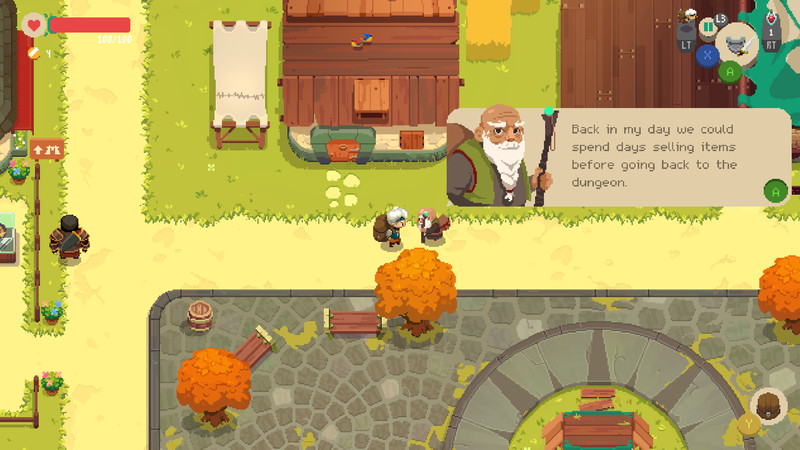 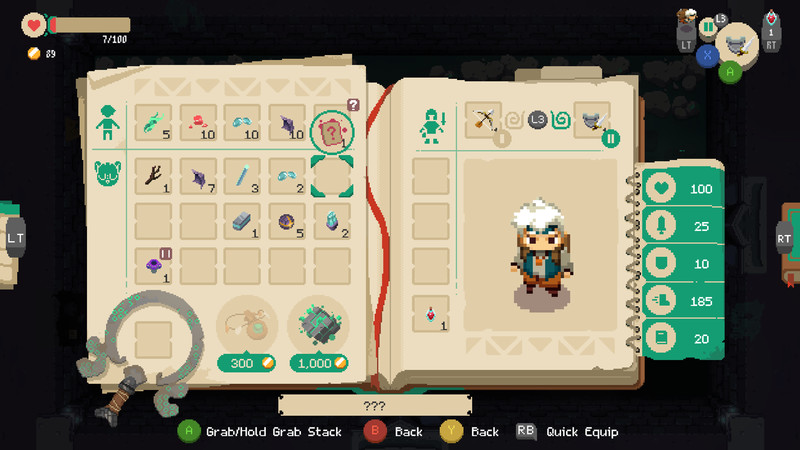 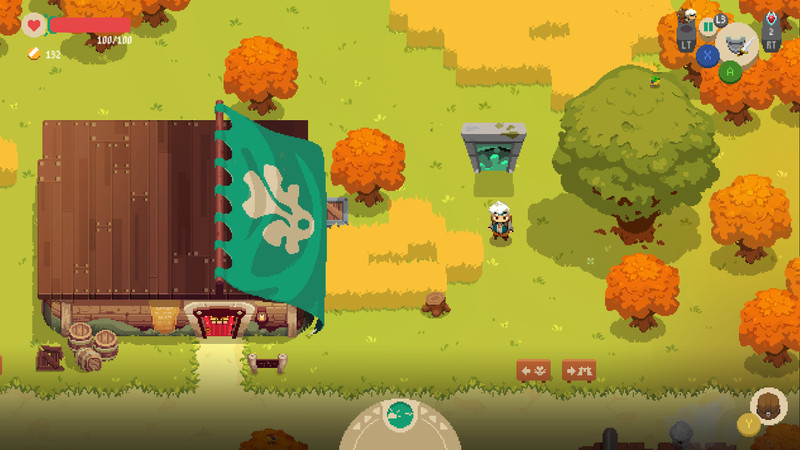 
Ah, what are great game! Everything is great in this game. I especially liked OSTs and boss battles. Overall graphics on high level, but there were some glitches with it. Gameplay is fun, story is not bad, characters are not bad (could have been better). Only thing I didn't like is grinding for armor and weapons (Played with Very Hard difficulty), but each dungeon is unique so you won't notice it, if you play with lower level of difficulty.
Definitely give it a try!. I have been playing this game for almost 10 hours now and I have to say that it is really a pain in the\u2665\u2665\u2665\u2665\u2665 I'm not saying the game is bad, but having to spend a few hours just beating one dungeon without any real sign that you're actually progressing through the storyline is really demotivating. Overall though, this game is not really that bad. I would recommend this to players who would enjoy a fairly long and boring process of seeing their characters progressively evolve and get stronger.

. Fun and simple game. The mechanics don't have much depth but still feels tight and satisfying. The visuals are nice as well. Some enemy attacks seem impossible to dodge; been playing on hardest difficulty but that just seems to effect the damage numbers.

I would recommend if not for the various bugs that have caused frustration and lost time:

I expect a game that has been out for a year and releasing DLC updates to have fixed bugs like this.. Shopkeeping aspect is incredibly lackluster. Dungeon crawling seemed like the part they wanted to have in the first place but the merchant part seems tacked on. Or if not, they didn't do too well on it. Recettear, which is a much older game has brilliant shopkeep-customer interactions with haggling and such. And the combat is pretty much like Zelda. Which is not a problem, but when most of the aspects of the game aren't unique or outstanding, it leaves a stale taste in my mouth when the combat itself is pretty much another game that is better at doing the combat than this game.

What it needed? Throw out the shopkeeping element because it isn't done well nor is it enjoyable for it bars your dungeon effectiveness behind upgrades gained through selling items at your shop anyway. Neither the shop nor the dungeon crawling needed to coexist with one another.

Also, it seems like EVERY indie game is a rogue-lite\/rogue-like of sorts nowadays. It doesn't need to be. If anything, it's getting old to click on a indie game page and immediately see it's another roguelite that doesn't even resemble Rogue. If I want that, I have games like Dungeons of Dredmor. If I STILL want a mix of genres with roguelike. Games like Rogue Legacy and Dead Cells do it so much better.

That is not to say it's bad game. But since we've got a binary rating system on here, I will have to say negatives outweigh the positives. The game is mediocre. Its negatives are so much more mild than many other games. But mediocrity itself count as a negative to me when it's a binary rating system. So if you're interested regardless, pick it up on a sale, I doubt you'll be too disappointed with it. But for me, I'd rather buy another game on sale that I will enjoy for hours on end.. Reminds me of Dark Cloud with Zeldalike dungeons. Great game.. I'd rate this 7.5\/10

Cons:
\u25b7Somehow feels repetitive. Would suggest more "events" while strolling in the dungeons. Might help reduce the feeling.
\u25b7Really static economy. I love this game's selling mechanic, but I'd love the prices to change everyday. Like, it feels as if am the only merchant in the world lol.
\u25b7Shallow story. So far, am near the 3rd dungeon. I dont feel like there's story yet. The only "story" I see is what the old man says when you walk at the dungeon selection area at night.

Pros:
\u25b7WEAPONS! ARMOR! Lots of them to choose from! Not as much as games such as "Enter the Gungeon," but its a decent number.
\u25b7As I said above, I love the merchant part of this (again, could use improvements tho).
\u25b7The artstyle. Its kinda cute :)
\u25b7Nice music.

Suggestions (that are not stated above):
\u25b7An endless mode. A true rogue-like mode where if you die, that's it. You're dead.
\u25b7More weapons and armor. Maybe some that increases bag capacity.
\u25b7Co-op maybe?

Apologies for grammar mistakes. English isn't my first language.. I enjoyed it overall, it gives off original Legend of Zelda vibes, except with all the dungeons in one place and an associated town, instead of an over-world you travel. The dungeon grind and subsequent selling of goods, feels like a good combination. If looking for flaws I would say all of the characters in the town feel half baked and under-developed. There's a girl who hints at liking the MC during the game for example but nothing really comes of it. Its the same for all the villagers with regards to the towns people. It would have been better if the town had some semblance of not being programmed robots spewing the same few comments on loop. The combat is a little simplistic with too few options but it has a more developed Zelda feel in general, which helps you ignore that fact. I would have liked more shop options, town events, etc... grabbing the thieves who all act in the same conspicuous way every time, becomes tedious toward the end and probably would have been more enjoyable if it was something along the lines of my lava lamp starting a fire or something... You don't get to beat up the thieves or anything, only toss them out to essentially try and steal from you tomorrow. Toward the end I really wished I had some options like "punch in the face" instead of just escorting them out. The explorer requests too are kind of screwy since they will want to send you to the first dungeon when you are working through the third or fourth, etc... Overall good game though. The updates have been meaningful like a new game + and pets being added so I wouldn't be surprised if the game keeps evolving. 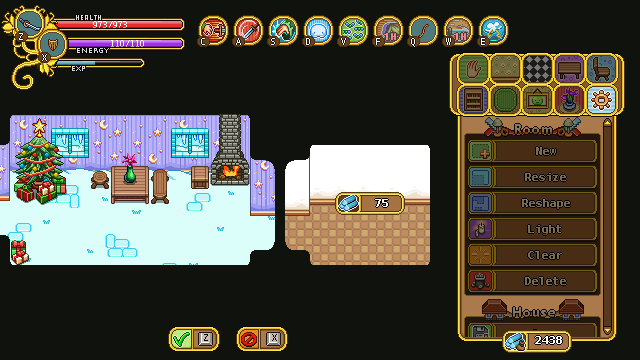 Patch Info. Patch 0.682a is out on Frontline!:
Frontline only! Click here for Frontline instructions[secretsofgrindea.com]

Patch Info. Patch 0.601 is out on Frontline!:
Frontline only! Click here for Frontline instructions[secretsofgrindea.com]

Wow, getting this out there took longer than I had hoped, for a variety of reasons. On the flip side, this has given Fred the opportunity to catch up (or rather get ahead), so I can start churning through story implementation again!

Anyway, like I said in the previous patch note, as Fred toiled away on some massive animations I seized the opportunity to make the game translateable through the Steam Workshop! This isn't huge news for everyone, but for a significant portion of our player base, having to play the game in English is really bothersome. Despite most gamers having a decent understanding of English, the details are still lost to many players.

Most importantly, this finally allows English speaking users that are sick of Bag's attitude to turn him into a cheerleader-type instead! Or make an English 'translation' with less cussing. Or... why not one where everyone swears like a sailor?

Hopefully the tools will see some use, or I'm going to cry myself to sleep for all the work spent on making them! Click here for more info on the tools[secretsofgrindea.com]

Another somewhat significant addition is a hopefully much more robust save backup system, which works independently of the Steam Cloud. I've also disabled the emergency save feature that triggers on crashes, as I suspect it was, ironically, the culprit of some save file loss bugs.

Oh, and you can transform Essence into hats now, for those of you who've got Arcade Mode Essence flowing out of your ears by now!

If you want to follow the progress and get a glimpse of the wonderful hell/heaven hybrid that is game development, you can check out our DevBlog[www.secretsofgrindea.com]! Be warned that it contains spoilers, though!

To see the full patch notes, check out this thread on our official forums: http://secretsofgrindea.com/forum/index.php?threads/frontline-versi.... Patch 0.599omega is out!:
Hey guys! We've updated both the Stable and Frontline versions to 0.599omega now, which mostly fixes bugs, but also adds a bunch of haircuts! Remember that you can go and try the new haircuts out on existing characters by visiting Franscisco in Evergrind City!

For full patch notes, please refer to the post in the official patch note forums:

http://secretsofgrindea.com/forum/index.php?threads/stable-and-fron.... Patch 0.719a is out on Frontline!: 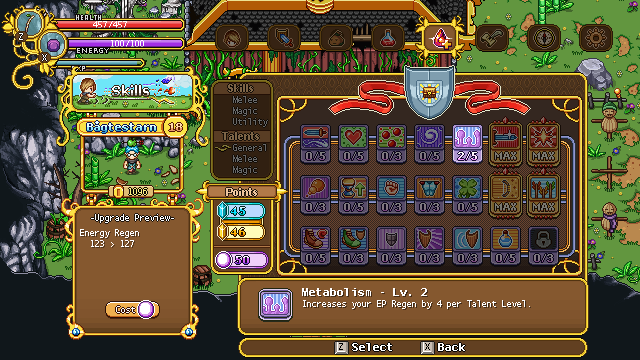